On the 11th of August 2021, fifteen members from Local History 1 visited Portchester Castle. The weather was kind to us as it was warm and sunny. We did not need a guide as every aspect of the site was labelled and interestingly portrayed in detail.

Portchester Castle was a Roman fort and probably established here in 280AD. From that time an Anglo-Saxon community was set up followed by the Normans after their Conquest in 1066. It then became a Royal stronghold throughout the Middle Ages. The Castle became a prison in 1665 and served as such during all the major conflicts of the 18th century, including Caribbean prisoners of war. Between 1810 and 1814 it was used as an ordnance depot. Since 1984 English Heritage has been responsible for the care and preservation of the site.

It was very interesting to see and read the graffiti carved by prisoners in several places, in particular that carved by a French prisoner during the 1850’s on the bastion of the inner bailey. The spiral staircase, if chosen to use, could have been daunting for some! The detail of its history is available to see and this made it a worthwhile visit. 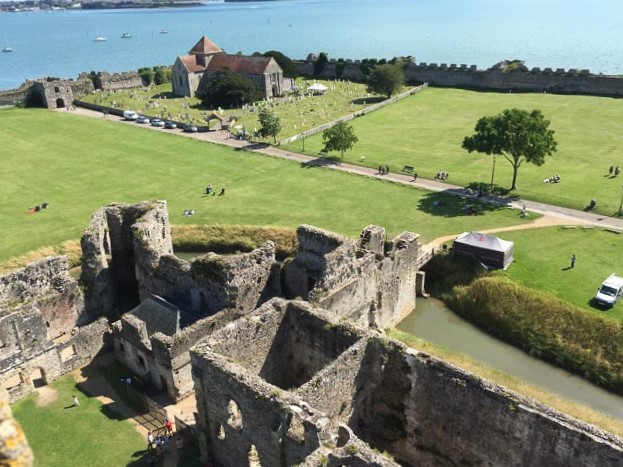