Local History 4 October meeting was a tour of the Apprentices Exhibition and archives of the Royal Portsmouth Dockyard Historical Trust. We were warmly welcomed by Nigel and escorted to the Apprentice Exhibition in Boathouse no. 7. Our guide, Grahame - a former apprentice, made the exhibition , spanning 200 years, come to life. He told us about the work of the apprentices and their tools. So many wonderful exhibits to see.

Workers had to clock in for 7 a.m and penalties were imposed for lateness, one minute late resulted in a stoppage of 15 minutes pay. Over 15 minutes would be a loss of half a days pay. Men collected their box of tools/equipment from the Tool Box Shed ready to start work. The end of the working day was 5p.m. From Monday to Thursday and 4p.m on Friday. Many of us will remember the mass exodus of workers leaving for home.

With no mechanisation apprentices learned many skills and were closely overseen. Perfection was expected. At the end of their apprenticeship four men were grouped together to build a dinghy, then had to row it to prove it seaworthy.

After a lunch break, we reconvened to hear the tale of Jack the Painter. Jack had sympathies with the Americans and their Revolution and tried to do his bit by burning down the half mile long, wooden, rope house. He succeeded at his second attempt. However, evidence was found and he was apprehended and charged with arson. Subsequently tried, convicted and sentenced to hang. It is said that 20,000 Portsmouth residents attended his hanging which was undertaken by dockyard workers deprived of their livelihood. The rope house was rebuilt with brick.

Our next stop was in Storehouse no. 10. The floor above the National Museum of the Royal Navy, not generally open to the public, is occupied by the Historical Trust and houses a vast collection of donated artefacts and archives about the dockyard. We were able to view this fantastic collection and also see the Rate Books, handwritten ledgers of dockyard workers from 1860 to 1960.

The role of women in WW1, the Triangle Girls, was explained to us. They undertook much of the men’s work but we’re under appreciated by the depleted male workers.

Our grateful thanks to the volunteers of the Historical Trust for a very comprehensive and informative visit greatly enjoyed by u3a members. 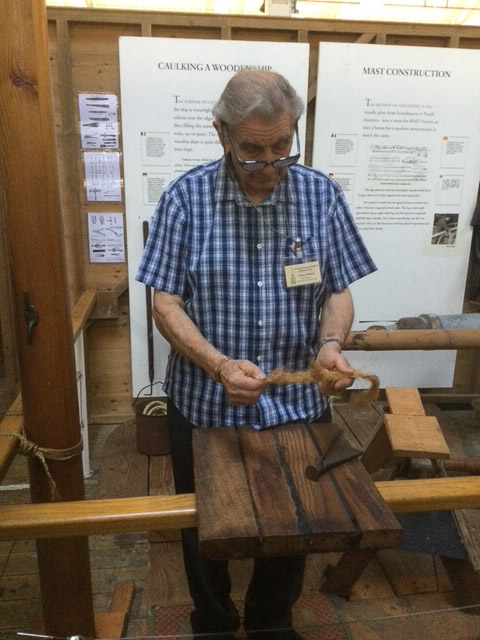 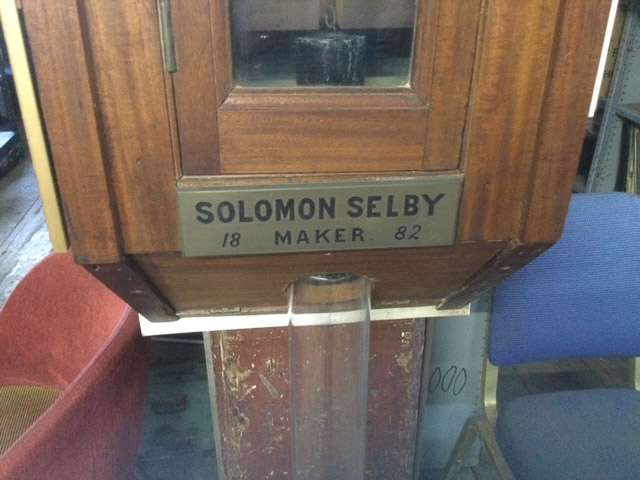 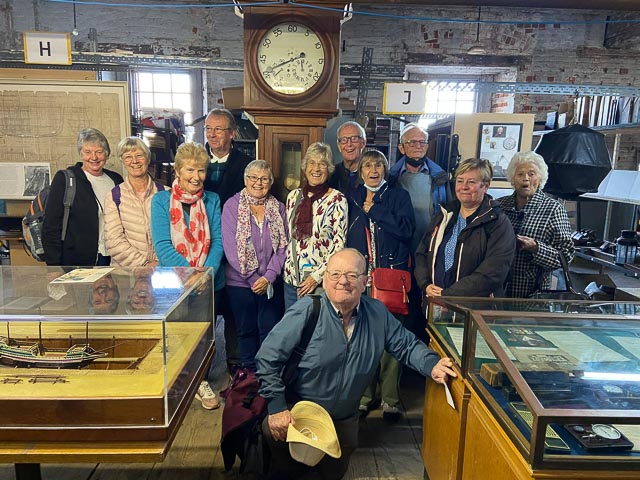 Local History 4 September meeting was walking the Havant Heritage Trail using the leaflet collected from the museum and with added history (researched by me.) We picked the only wet day for a long time, well done all those intrepid members who turned out.

Havant owes its development to the many fresh water springs and was known as Haman Funta, Haman’s Spring.

We met at the crossroads where East to West was the main route from Chichester to Southampton and Winchester, North to South was the route from the potteries in Rowlands Castle to Langstone and the Wade way to Hayling Island.

The main building material is now brick after a disastrous fire destroyed much of North, East and West Street. The oldest buildings are situated in South Street.

in Homewell we were able to see the spring still bubbling up, with the parchment factory nearby. Parchment was a writing material made from treated skin of sheep and goat. (vellum is superior, using the skin of younger animals probably calf or deer). It is possible that Magna Carta was signed on Havant parchment, the Treaty of Versailles, ratifying peace terms and the end of WW1, was certainly signed on local parchment.

Onward to South Street, the least changed area of Havant, to see the oldest building in Havant, The Old House at Home, an example of what buildings would have looked like before the fire. With oak beams and narrow windows it was much restored in the 16th century. Inside there are beams said to be from the Spanish Armada and a post to which the last dancing bear in England was tethered. The terraces of 18th century cottages show good examples of the local red and grey brick and how they have weathered. Further down South Street is a fine mansion Hall Place, built on the site of a farm with Dorset yellow brick, presumable to display the wealth of he owner.

Moving to East Street, which still houses some fine 18th and 19th century properties nearly all now converted to offices. The Bear Hotel was a major staging post. A young Victoria may have changed horses here on her way to Portsmouth. Many members also remembered the wonderful hardware shop, Streets and other retailers/ businesses. Along the street we saw the Twittens, narrow alleys, providing access ‘betwixt and between’.

A brief stop at The Spring and Havant museum which had been visited as our last meeting before the first lockdown was imposed. At the old post office opposite, built in 1936, the cipher of Edward VIII was noticed. There can’t be too many of those in the area.

Our last stop was at the Gazebo Garden. Tucked away in the car park of The Pallant. Restored in recent years by the Bosmere Society a little, almost secret gem. Erected in a garden from East Street a small tower provided a gazing place for the owners to observe the fields and countryside beyond. We were fortunate that Bob Comlay, from Havant Civic Society had been able to open the room for us to see. A donation was made towards the upkeep of the garden.

The trail leaflet continues the tour but that has been left for members to explore in their own time.

Hopefully, everyone discovered something new about the history of Havant.
Mary Shilstone
Group Coordinator 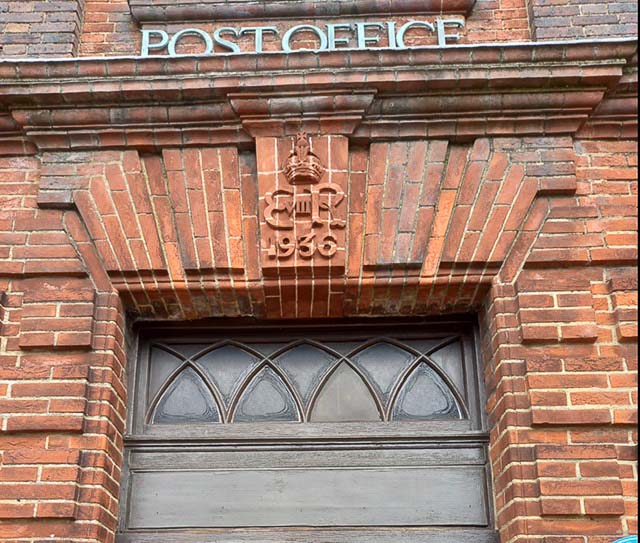 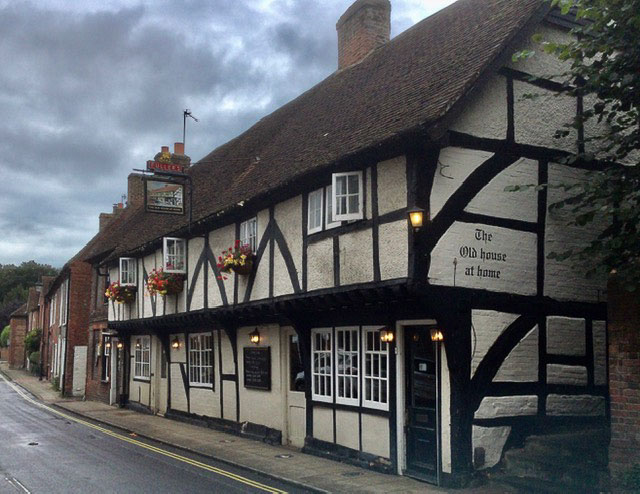 Local History 4 August meeting was a guided tour of Fort Nelson focusing on the building and briefly on the Royal Armouries Collection. Our guide was excellent and even if we had visited the fort before we all learnt something new.

Portsmouth harbour and its valuable location has been defended since Roman times with the main focus of the possibility of invasion from the sea. However, with the rising threat from the French in the 19th century it was realised that landing from along the coast and attacking from landslide was a threat. Hence the building of Palmerstons Follies.

In 1860 a series of 5 forts was announced, with guns facing inland along Portsdown Hill. Work began the following year with well paid navvies shifting up to 20 tons of earth a day, digging ditches and creating ramparts. Building began using 4 million bricks and flint from Portchester Castle. The design of the fort is remarkable providing a low profile but with barracks, parade ground and 48 big guns. Tunnels link the ramparts to the parade ground. The brickwork is amazing.

In 1871 the fort was occupied by 7 regular officers, 171 volunteers, 2 horses, 16 wives and 24 children. Barrack rooms were shared by everyone. There was even a 10 bed hospital, campaigned for by Florence Nightingale in her bid to improve military health.

Despite all the defences in place there was no enemy engagement.

As time passed, changes in Europe forced an expensive arms race and Fort Nelson became an artillery base. In WW1 the fort was used as a transit camp for troops on their way to the Western Front. During WW11 the fort was used for storage of ammunition and armament. Fortunately missed by enemy bombing!

Today the fort houses the artillery collection of the Royal Armouries including the oldest dated gun in the world, 1464, the magnificent Great Turkish Bombard cast in bronze weighing 2,265 lb and still being used in action in 1897.

Without electricity and modern amenities life would not have been easy in Victorian times but how clever they were. Our guide told us about the lives of the people in the fort and some of the details of the armaments in place. It was a fascinating tour which barely scratched the surface, leaving us with so much more to see and explore in our own time. 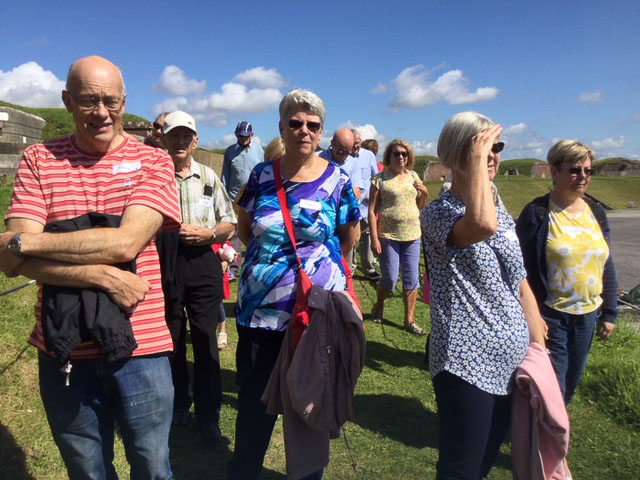 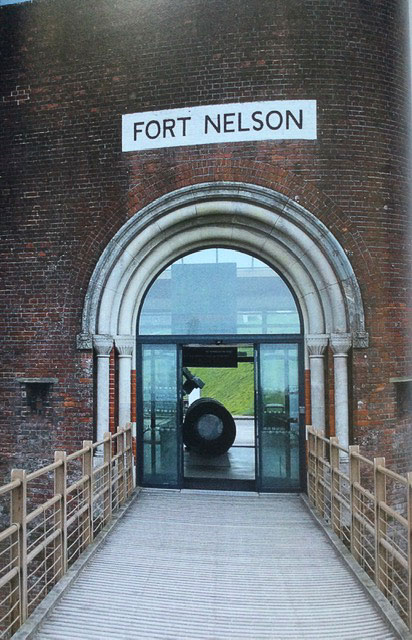 On a beautiful sunny day Local History 4 visited Gunwharf Quays to discover its origins and development.

Gunwharf today is a very different place to early days. Now a bustling, thriving, mixed development of housing, shops, entertainment, restaurants and businesses, all in a unique harbour side location. The Spinnaker Tower, now repainted white, is a spectacular landmark, visible from great distances.

Gunwharf can be traced back to the 12th century as a dockyard for royal galleys. Over 300 years ago part of the harbour was reclaimed to build facilities for all the needs of the Royal Navy. In recent times many of us will remember it as HMS Vernon. Eventually this establishment declined and became a shell of its former self and was put up for sale.

With great good fortune the site was developed keeping, and restoring some of its features and historical buildings.

We entered through the Vernon Gate which had been the original entrance. The Customs House, now a pub, was only briefly used for customs but was really storekeepers offices allowing good views of the loading operations of valuable guns and stores. The Flemish brickwork is to be admired. The Grand Storehouse (1811) known as Vulcan was the largest in any dockyard providing storage facilities for cannon, gun carriages and many small arms. This beautiful building is now converted into apartments an art gallery and a restaurant, slightly away from the bustle of the retail areas.

There are many boards around the Quays detailing some of its history. Too much to take in on a hot day but to be savoured in future (individual) visits.

An area so rich in history, the site has been sympathetically restored and developed. So much to see and discover. I shall be looking at Gunwharf with very different ‘eyes’ in future. Many thanks to Gareth and Caroline for leading and researching the information for this visit.

A book by Michael Underwood, Gunwharf Quays Portsmouth can be borrowed from the local library. Sadly only one copy is available. 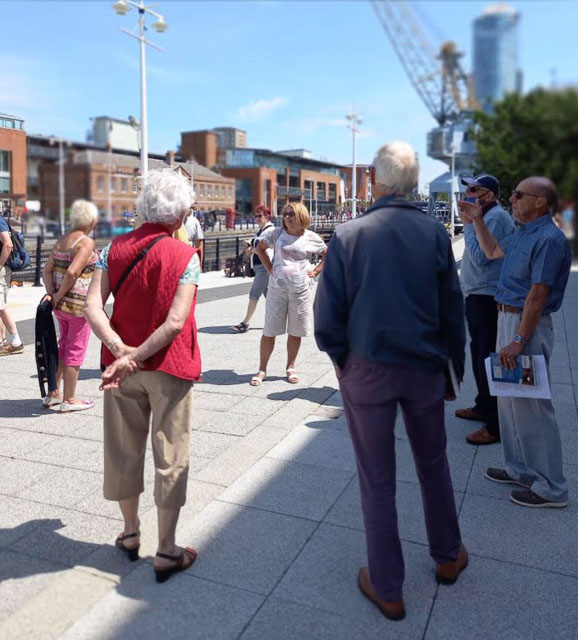 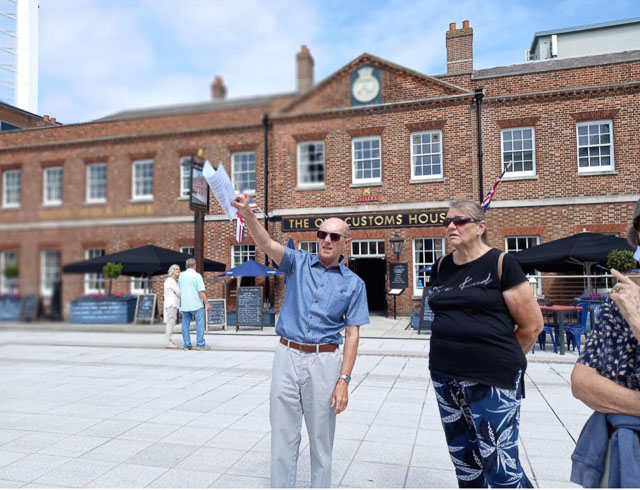 Our first live meeting for over a year! May 18th. Just a few of us met to walk in Park Wood (Waterlooville) and learn about its history, led by John Care.

Originally part of the Forest of Bere, in the 1830’s the Hart Plain estate, including Park Wood, was no longer managed for timber production but used for pleasure grounds for the Friend family and their guests. Within the Wood a walled garden was developed which probably provided fruit, vegetables and flowers for the estate.

In 1910 Dr Beddow moved from the Sheffield area to take up a senior position in the Portsmouth Municipal College . He bought the western half of Park Wood where he built his house. When possible he bought further parcels of land within the Wood and kept the estate in very good order.

Dr Beddow became an important person, a city and county councillor, J.P. and board member of many charities. On his death in 1953, aged 92, he left most of the estate, in trust to his housekeeper, Miss Ellis. Subsequently the estate would be sold and the proceeds offered to Portsmouth City Council for construction of a public library in Waterlooville if the village had then become part of Portsmouth, otherwise in Milton!

Despite the residential development at the edge of the woodland this delightful 8.5 hectare Wood has been preserved. It is a haven for wildlife with spectacular ancient yew trees, beautiful beech trees and bluebells. There is little trace of the walled garden, brickwork has been engulfed by plant life. The Wood is now managed by the Woodland Trust.

Having lived in Waterlooville for a very considerable time Park Wood was unknown to me and I am delighted to learn even more about the local area. Mary Shilstone. 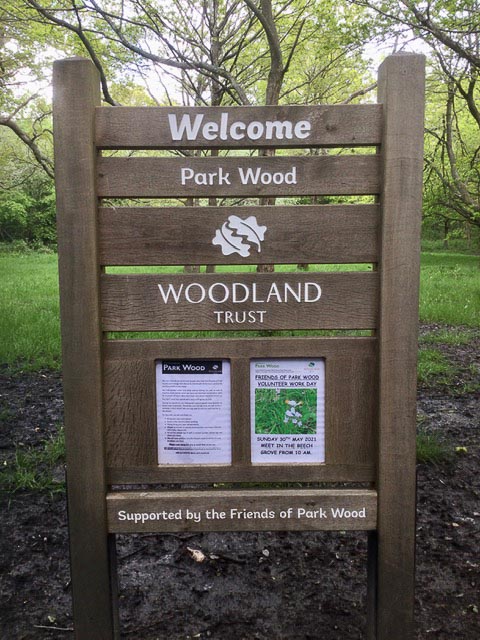 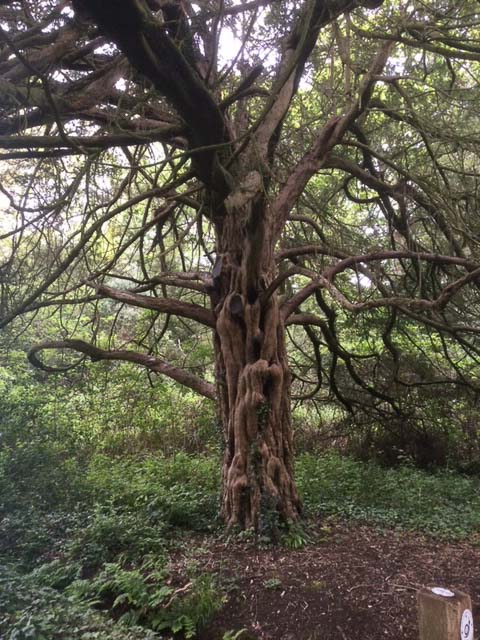 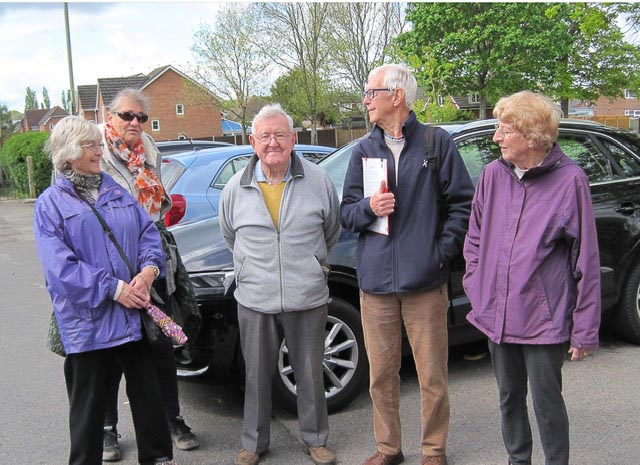